15 fascinating facts about The Canary Islands 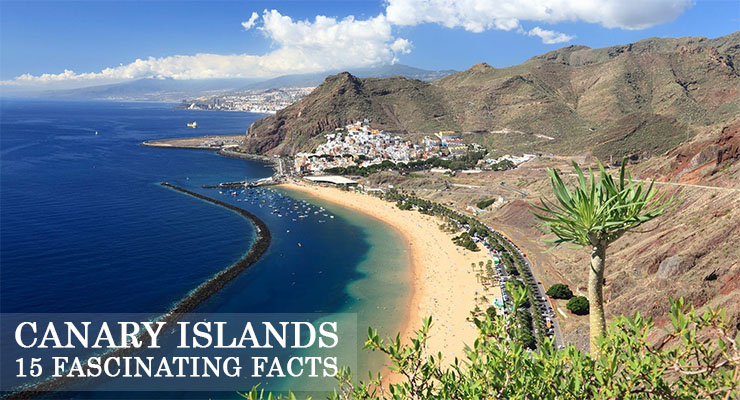 With our summer weather now well and truly drawing to a close, many are thinking of a winter sunshine break – and The Canary Islands have always been a popular choice for Irish holidaymakers.

Sunshine all year round, beautiful beaches, and other attractions for all ages all add up to a near perfect holiday destination. But how much do you really know about the islands and their history? Here are 15 fascinating facts that could be conversation-starters as you’re sipping a cocktail in Gran Canaria or working on your tan in Tenerife:

Despite the name (with ‘Gran’ being Spanish for big or large), Gran Canaria is not the largest of the Canary Islands. Instead, it’s Tenerife. El Hierro is the smallest.

No, the islands were not named after little yellow birds. Instead, the name comes from how ‘canis’ is the Latin word for dogs, as islanders are believed to have worshipped dogs thousands of years ago. Another theory is that the name refers to ‘sea dogs’, which was a Latin term for seals – which have always been plentiful in the waters around the islands.

While canary birds are indeed native to The Canary Islands, they are actually called after the islands – not the other way round.

If you don’t fly in, your only other way of getting to The Canary Islands is a ferry trip from mainland Spain, that takes more than 20 hours. There are no ferries linking the islands to Africa, despite it being only 100km (62 miles) away at its closest point.

All the islands are volcanic islands. Indeed, Tenerife is home to Mount Teide – the third highest volcano in the world. An estimated three million people visit it each year.

Probably the most popular sport in the islands is unique to the islands. It’s a form of wrestling, called Lucha Canaria. It’s a little like sumo wrestling, as contestants grapple in a circle in the same way. However, their aim is to force their opponent to the ground, not out of the ring. Another difference is that they don’t tend to be quite so big as sumo wrestlers!

You won’t notice unless you have fluent Spanish yourself, but locals  speak with an accent that sounds more like Latin America than mainland Spain.

Similarly, there is a real Latin American influence to local cuisine – along with the Spanish and African influences you would expect. This is because the islands were a regular stopping point for Spanish fleets on their way to and from South America during the days of the conquistadors.

The population of the islands is just over two million, but they get an estimated 12 million visitors each year.

This makes tourism the number one industry. Agriculture is number two. Many farms grow flowers commercially, as well as fruits and vegetables.

The British Vice Admiral Horatio Nelson, who famously lost his right arm in battle, lost it when he led a fleet to attack Tenerife. He lost 400 men in that battle too.

You’ll find all the usual fast food chains (McDonalds, Burger King, KFC, etc.) in several places across the islands – but curiously, there’s only one Starbucks. It’s in Gran Canaria Airport. So, if you simply HAVE to have your regular grande half-caf, half-sweet, no-whip, coconut milk, cinnamon dolce latte with agave and no topping, then remember you can only get it at the very start and very end of your holiday!

Remember your travel insurance for The Canary Islands

If you’re planning a trip to The Canary Islands any time soon, we hope you have a great time, and that nothing worse happens you than maybe not being able to place a complicated coffee order like that Starbucks one.

Remember though, that things can and do go wrong on people’s holidays all the time, and next time, it may just happen to you. That’s why carrying comprehensive Travel Insurance for your trip is so important.

You probably won’t lose an arm like Nelson did, but a policy with Insure My Holiday will provide great protection against the things more likely to happen – such as lost luggage, delayed departure, or personal accident and medical expenses.